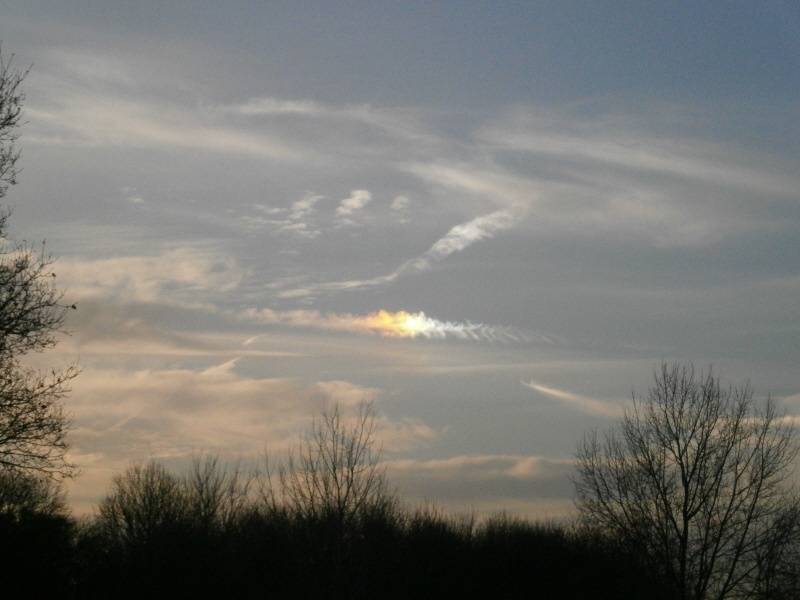 22 Dec After the Solstice, the Sundog

Posted at 16:53h in Journal by Melinda Appleby

The first day of the solar year has brought a chance to see the phenomenon known as a sundog.

In the dark of the year, we turn to the skies for interest and today did not disappoint. On our way home, about 3pm, with the sun sinking, a sundog appeared to the right (north) of the sun. Starting first as a glow of light, it developed a rainbow coloured stripe within the thin cloud that straddled the sun, the red end of the spectrum closest to the sun. Most frequently seen in cirrostratus clouds, which are produced in advance of a rain-bearing warm front, the sundogs can suggest deteriorating weather and the coming of rain.

I first came across sundogs on a visit to Stockholm and the inspirational Museum of Mediaeval Stockholm. Here an exhibit features a painting from the first half of the 17th century, copied from an older original. Called the Parhelion Painting, it is the oldest portrayal of Stockholm in existence. It was commissioned to represent parhelions which were seen in the sky between 7 and 9 o’clock on the morning of 20th April 1535. Parhelions, from the Greek parhelia meaning beside the sun, are also known as mock suns or sundogs and were regarded as ominous signs. The painting shows sundogs hanging portentously over Storkyrkan, the Great Church.

Today we can capture the sundogs instantly with digital cameras and they look more benign. But with the sun beginning its cycle of growth, being reborn into a sky with attendant sundogs, perhaps we too should be warned of ominous signs for the coming year. Or perhaps it is just a foreshadowing of storm Barbara which is forecast to bring wild winds and rains in the next couple of days. Taking no chances we have secured the guy ropes on the log store.

If nothing else, today’s sundog shows the power of nature to fascinate, delight and inspire.