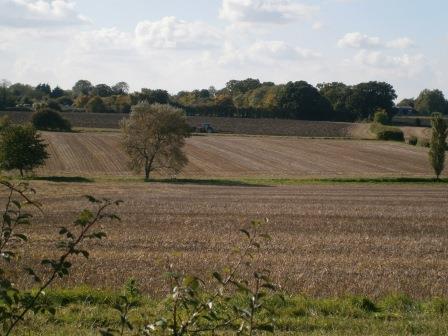 Posted at 10:30h in Journal by Melinda Appleby

The Equinox and at last a day worthy of autumn and a time to reflect.

We woke this morning to a soft mist that veiled the sunrise. The lanes were quiet, sprinkled with a first falling of leaves. A solitary chiffchaff called and then a bullfinch piped out of its usual haunt.

I do this walk every day and have been reflecting on the value of the local patch. For more than ten years these fields and lanes have been my neighbours. Walking amongst them brings a familiarity and a sense of attachment. As seasons turn and come round again, the weather shifts and the crops cycle through their year. I watch the trees as they come into leaf, anxious to know they have made it through a winter. Did any of the ash succumb, unseen, to Chalara; will the glorious old elm that somehow still survives, escape the beetle yet again. Where have the territories shifted. The blackbird with the strange song has moved to a different hedge but the wren with its distinct three note phrase is still here.

The house martins and swallows have left and the skies seem empty without their constant calls as they buzz after flies. The house martins raised two broods this year and they all fledged well before the autumn mists set in. At the end of August around 80 circled the garden for an hour, skimming over the hedge and round the back fields, then funnelling upwards in tight excited flocks, and then they had gone.

Instead today we watched seven buzzards lazily circling over the house, coiling higher and higher into the blue. There have been unexpected sightings – a red kite crossed the field one afternoon, flicking its forked tail over the oak, and then was gone. Egrets regularly fly over and a kingfisher flashed down the green lane one afternoon, far away from water.

As I sit writing, there is a deafening chorus of excited chatter from the house sparrows. Suddenly they fall silent, as though an unseen signal told them to pause. Sometimes the silence is followed by the sparrowhawk’s quick dash through the garden, but not today. Resuming their excited squeaks, and a few musical notes, they drown out the robin. There are 28 sparrows. That is a big flock – the most sparrows we have seen for many years. In the 1980s it was not unusual to have flocks of 200 coming in the winter to feed

In my local patch, imprinting the fields and the woods on the mind through the repetition of walking, instils a strong sense of ownership. As I walk, I listen and can pick up more clues to what’s going on. I hear a shrew’s shrill rustle, the bark of a muntjac, the rattle of magpies. Now with autumn’s arrival, everything changes again. Small parties of birds pass overhead – some starlings, some finches. A week ago 14 lapwings flew over, heading steadily east. Close attention to detail – a requirement of good writing and good observation – brings the landscape into sharp focus.