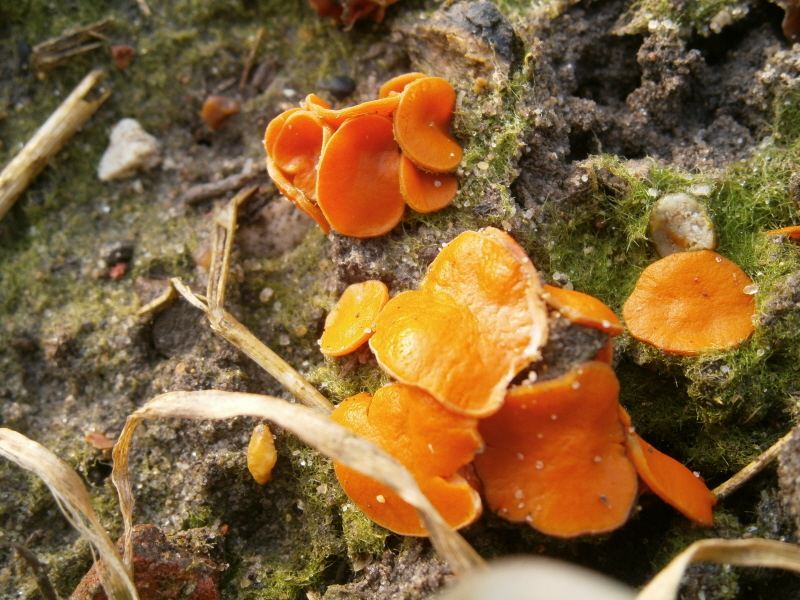 Posted at 15:51h in Journal by Melinda Appleby

All too often our interest in nature is kindled by charismatic species and mobile species. It is easy to overlook the smaller, humbler things.

But they are just as important in the whole web of life. Over the past weeks, I have noticed a bright orange- red fungus growing on the edge of an arable field. The soil is compacted by tyre wheelings and thatched with half rotted straw from last year’s harvest. On several mornings I have thought about these patches, which look like a scatter of brick fragments.

This week I decided to investigate and discovered a strange and rather beautiful fungus. After some diligent searching in books and on the internet I am fairly confident that it is something called Melastiza cornubiensis. Some sources call it Orange Cup Fungus and then become confused with the larger Orange Peel Fungus. The little cups in the field are barely 5-6mm across.

The world of fungi is a mysterious and magical one. They appear overnight – out of the dark – out of the earth – puff up and puff out – and disappear. There are over 100,000 species, from microscopic yeasts to the huge bracket fungi that grow on trees. Most people think of the edible mushroom, or the poisonous toadstool, but overlook the other small and strange species that make up this group.

Fungi are separated from the rest of the plant kingdom by their lack of chlorophyll, which enables a plant to make energy from the sun’s rays. Without this, fungi rely on nutrients from dead and decaying organisms or from the tissues of host plants. When we look at the ground, even though at this time of year it seems inactive, we are looking at a factory, digesting, decaying, recycling all sorts of plant and sometimes animal litter.

I look again at the little orange cups hiding amongst the decaying straw. These are the spore producing parts of the fungi, essential to its future life. The main body of the fungus lies underground. I kneel amongst the new year’s growth of wheat to take photographs and ponder on the myriad of life forms that make up this world of ours.