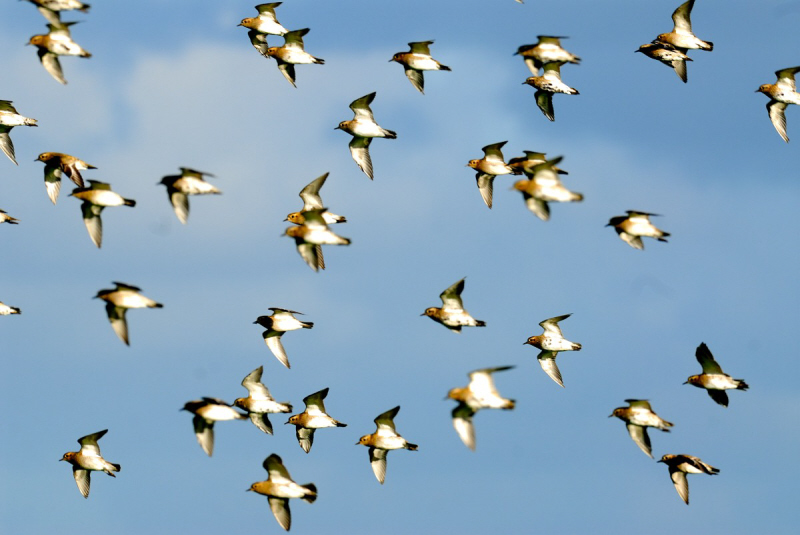 Posted at 12:32h in Journal by Melinda Appleby

It was 1st April and a late afternoon walk across the farm. The wheat was just pushing through, a green haze across fields. A yellowhammer called from a scrubby oak. Five hares ran along tram lines.

And then the cold air rang with music – a melancholy whistle, falling from the sky, resonant of marsh and moor. I looked up. Circling above me were golden plover. They wheeled and turned in a flickering silver flock, joining with a second flock, a murmuration of plovers. For twenty minutes I sat spellbound on the field edge as they danced in the air, an occasional plaintive two note call passed between them. I counted – in tens, then hundreds. At a rough estimate there were 300 golden plover above me. I made myself small, crouched into the hedgeline, hoping they would come down but their circles moved higher and away, then back again, and finally moved east. Only when I left did I see another 50 on the brow of an arable field. Were they being called to join the migration north and east, back to their Arctic tundra summer home.

In Iceland the golden plover is greeted as the harbinger of spring. It is called The Sweet Spring Herald and children sing a song to welcome it – ‘the plover arrives to sing away the snow.’ This year, the first golden plover arrived in Iceland at the end of March while the ground was still snow covered.  Three were spotted on a beach in southwest Iceland.  By 7 April they were arriving in large flocks to a land still in the grip of winter with strong wind, frost and snow. Was this flock heading for Iceland or would it stop on the moors of northern England and Scotland.

There have always been overwintering flocks of lapwing and golden plover on these fields, stopping to feed on migration. This year I had seen none except one small flock of 30 lapwing who stayed for only one day. The sight and the sound of golden plover moving north, following their own migratory cycle, despite all the changes we are making to their landscape, is a magical moment.