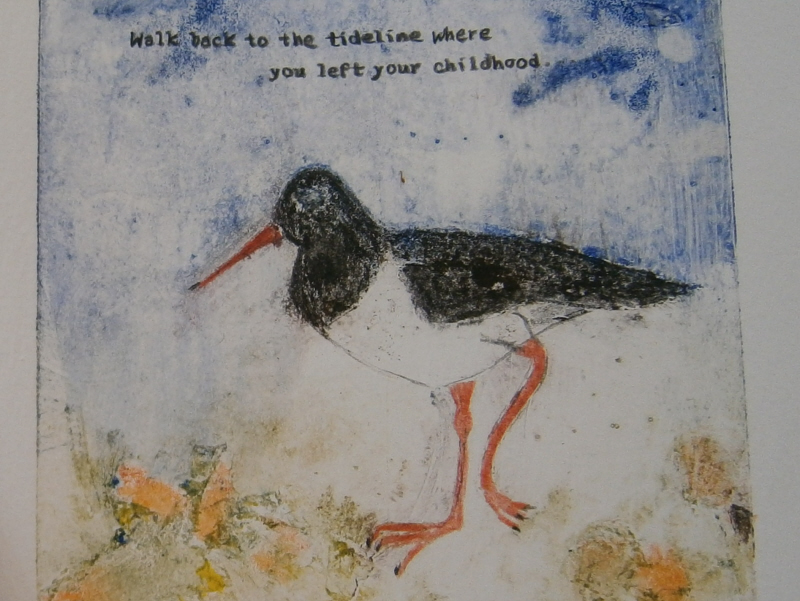 19 Apr Once Upon a Childhood

Posted at 13:03h in Journal by Melinda Appleby

Fifty years ago, I prepared a school project on the North Norfolk coast.

Its scope went from the geological history of the glacial retreat and terminal moraines that make up the landform near Weybourne, through the natural history of this wild coastline, to settlements and historic buildings. It earned me two honour marks and a comment from my headteacher that it was worthy of a geography A-level or University student and she hoped I would go on to become both, which I suppose, in a way, I did.

It is a coastline that captivates and moulds those who live there. I grew up at a time when it was still an area little visited. Professor Steers had undertaken his research into coastal morphology at Scolt Head Island and the Wildlife Trust had established a reserve at Cley. But most of the marsh, sand, creek and dune landscape that comprised this stretch of coast was the haunt of fishermen, wildfowlers, baitmen and farmers.

Childhood was a time of discovery. My father would lead us down to the beach by wading along the creeks at low tide, warm mud sliding between our toes, salt stinging our lips, ears learning the music of the waders that flushed out of the marsh as we approached. My grandfather taught us to sail in a Puffin, constantly tacking as we navigated the creeks and we swam bouyed up in salty water where pools of water collected as the tide dropped.

This was an undesignated coast. There were no boardwalks, interpretation boards, signs as to where we could and couldn’t go. We were given a pair of binoculars and a field guide to birds and worked the rest out for ourselves. We couldn’t be sure what might turn up. One early morning I saw a pair of Montague Harriers at Thornham, perched on fire brooms either side of the gap into the dunes. On other days I sat and watched the kingfishers above the old drain where I could dip for stickleback.

We learned the unwritten rules of the sea, the pull of the tides, the need for caution when spring tides surged up the road towards the village, the sneaky habit of the sea coming in from behind and trapping people on sandbanks. As I have written elsewhere (5/11/16) there was a small bird observatory where we helped Peter Clarke with migration counts and learned from him about moths, migration and the rhythms of the Norfolk coast.

A few miles further east we walked the sea wall at Titchwell, little visited then. Here the first marsh harriers arrived – taking over the old trees, killed by salt incursion. Pill boxes and gun platforms peppered the shoreline and we would clamber down into the evil smelling holes, emerging blackened with mud. Just off the sea wall was a small sign where someone’s ashes had been scattered – A place he loved, a place to rest. We always stopped to read it – and shared the sentiment.

We so rarely saw anyone it felt like our place. I have been told not to go back but every year I feel the same yearning, a sort of homesickness, for the coastline of my childhood. But it is not the same. It has been discovered, claimed by conservation groups, fought over by them when the next piece of land comes onto the market. It has been engineered to showcase the most exciting wildlife with a string of vistor centres and hides. It is without doubt a special place but it has lost that element of self-discovery.

That doesn’t mean it was perfect. I grew up just at the time when land was being brought into cereal production, marshes were drained, meadows ploughed. It was one incident at Thornham that probably set me on the path to the career I have followed. There was a field behind the sea wall that was alive with wildlife. Skylarks spiralled up in noisy chorus, barn owls hunted in the evening, little terns fished in a pool by the sluice, frogs called on spring evenings, summer colours came from the profusion of wild flowers. One day I walked down to discover it full of machinery. It was drained and put under the plough. But for seven years, the crop didn’t seem to be worth the loss.

I feel lucky to have grown up at a time when I could wander out and explore without being given a waymarked route to follow or told which rare but elusive bird has been attracted to the reserve this week. Wildlife seems to have become something you go to – like a destination experience – rather than something you discover. When I was still at primary school, my parents gave me a book:  Every Child’s Book of Birds and Bird-watching. One of the illustrations was captioned: “Small ponds are worth investigating”. This became a family saying, encouraging us to stop off and investigate places no matter how small or insignificant they might seem. It is that curiosity that has led me on from my Norfolk childhood.