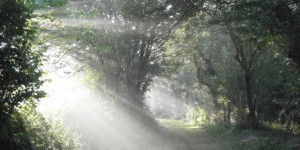 A lane hung with trees, a fallen oak sheltering a wasps’ nest, a walnut tree hiding in the hedge, hornets clinging to oak bark in the wood, this is an unremarkable landscape. A quiet patchwork of fields and tracks that threads through the parishes around Mellis, in the valley of the Waveney and its tributary the Dove. It is not a National Park, nor an Area of Outstanding Natural Beauty. But that is its attraction. Here in the secret and subtle heart of Suffolk, in a landscape hewn from woodland, pressed across by drovers, and fashioned by centuries of people working the land, is a back-of-beyond place. This is what attracted Roger Deakin to move here from London in the 1970s.

“I chose it originally more than thirty years ago because of its relative obscurity. I pored over maps, deliberately seeking the least-frequented corners, hoping for a ruin drowned in trees a long way down a bumpy track, and that’s what I found.” Notes from Walnut Tree Farm p 229

I live here, in these hedged and wooded claylands, and I walk the tracks and paths every day noting how things change with the seasons and the rhythm of the land. A morning when buzzards lift lazily into the lane, or evenings when the hedgehog snorts and sniffs past my shoes as I follow the green lane in a bat buzzing dusk. Times when the sudden harvest shaves the crops, and hares run for cover, black tipped ears racing across the stubble. Or, in a mist cloaked dawn, catching two roe deer standing in a shaft of sunlight. It is a landscape of little happenings set within big arable acres. Roger Deakin made it his own, spending his time rebuilding his house, working on his twelve acres and roaming on foot and bike. It was his love of the small things, his noting of the detail of this ordinary countryside, and his practical engagement with the land, that suffused his writing and made him such an engaging chronicler of the countryside.

I came to Suffolk as a farm conservation adviser at the end of the 70s, a decade when government grants and a drive to increase food production, had wrought widespread change on the land. Deakin, settling into Walnut Tree Farm, was outraged at the loss of woods and hedges:

“When I arrived here in 1970, a farmer was helping himself quite openly to the two and a half acres occupied by an ancient droving road that may well have been there for 4,000 years. He bulldozed and uprooted the hedges and copse trees, and dynamited the more spectacular of the oaks. It was a major piece of work.” (Notes from Walnut Tree Farm p 34-5)

For much of his life Deakin was a campaigner and an activist for the countryside, for country people and for wildlife. His focus was always the connection between nature and culture. He worked for Friends of the Earth and then set up Common Ground with two of his colleagues. It was possible, back then, to find pockets of Suffolk that had hardly changed; men still harvesting sprouts with sacks tied round their waist, out in the early morning frost; farmhouses still with outside toilets; yards where you needed your wellies on to step out of the land rover into thick mud; hedges still blowsy with rose and bramble and kept in check with a billhook. It is easy to forget how much has changed, how much, both good and bad, has gone.

It is remarkable that so much has survived. I can walk the green lanes here for many miles, barely touching a road. I follow the old lane past water meadows, across the Thornham Estate, with its network of permissive paths, and on to join Cowpasture Lane and into Mellis. Cowpasture Lane was Deakin’s route into the countryside, an old drover’s road that changes in character from a wide byway to a narrow bramble brushed track. Either side of the lane are deep ditches and huge old coppice stools. It was Cowpasture Lane that Deakin fought hard to save. In the late 1980s a farmer acquired the field neighbouring part of the lane and proposed to remove the hedge and ditch and bring it into cultivation. Deakin talked to the farmer in a bid to save it:

“(I) discussed it with him, pointing out the great antiquity of the lane, its status as a footpath of great natural beauty, its value as a wildlife habitat in an area of spreading wheat prairies, and its importance as a link, for both humans and other creatures, between two important features of the local landscape – Thornham Woods and Mellis Common.

He replied frankly that he disliked trees and hedgerows, which he regarded as obstacles for his machinery and harbourers of wildlife.” (Holding Your Ground p 59)

Through Deakin’s action, contacting landscape experts and the local authorities, a Tree Preservation Order (TPO) was served on 9th February 1981. Sadly the farmer heard about the impending protection and, on the Sunday before, went out and cut as many trees down as he could. Deakin contacted his network of friends and colleagues in the media and Friends of the Earth, and secured widespread coverage for this. The TPO remained to protect the rest of the lane. A TPO covers the rootstock as well as the standing tree which meant that, left to regrow, the lane gradually recovered from its coppicing.

Cowpasture Lane is such an important feature of our local landscape, and Deakin so instrumental in its survival, that I felt we should walk it in celebration of his life and work. I enlisted the help of local writer, and friend of Roger Deakin, Brian Guthrie, and we planned a walk as part of Waveney & Blyth Arts summer creative walks programme. The walk took place on Friday 19th August, the tenth anniversary of Deakin’s death. We could have taken twice as many people and had to turn away so many.

People came on the walk with their own ideas and thoughts and memories. They came from local parishes, and from London and the Suffolk coast; there were people who knew him, whose children were taught by him, who had moved to the area into houses he had described, all drawn to visit this part of Suffolk by a love of Deakin’s three books. The landscape captured by a writer may not seem the same when the reader arrives here for real. Was the house smaller, the moat more overgrown, the countryside more ordinary, Mellis Green less interesting. Is it still Deakin’s countryside without Deakin?

His eclectic interests, and his fascination for individual moments in nature, make his books so important; moments such as an ant being lost on his desk or a lacewing twirling her antennae. These observations bring his texts alive with insights into the natural world. More importantly, Deakin’s humour and quirky, but memorable, imagery give the reader a feeling of personally being with him, travelling through wood and water, making discoveries about nature, history, culture and themselves.

We read extracts from his books as we walked along , starting at Thornham Parva church, a small thatched church whose wall paintings depict the story of King Edmund. Deakin suggested the church may mark a stopping off point for a ceremonial procession of King Edmund’s body. We walked along tracks, through copses, onto Cowpasture Lane. Our first reading was from Waterlog where, for many people, Deakin’s books began, in the moat at Walnut Tree Farm. He describes why water is such an important element:

“You are in nature, part and parcel of it, in a far more complete and intense way than on dry land.” (Waterlog p 4)

It felt serendipitous that a light rain began to fall – how Roger would have enjoyed the moment.

Cowpasture Lane progresses north, wide enough for a cattle drove to pass through, then narrows into a single path through a tangle of bramble, coppiced regrowth, and Deakin’s favourite blackthorn. We stopped on the footbridge over a small stream where Deakin describes walking out one evening and we shared his reflections on childhood attachment to place and the need for secret remote hideaways. Finally we set off across the bare and stubbled arable field from which the old drove road had been removed

Dicing with death we crossed the railway, aware of National Rail’s current consultation on closing various crossings in and around Mellis, and to downgrade routes from byways to bridleways – would Roger have been campaigning against these proposals?

Finally, with two readings from Wildwood about Deakins’ love of sheds, and how he first discovered Walnut Tree Farm, we arrived at the farm. We are grateful to the current owners who had kindly agreed to let the group walk around the 12 acres, still much as Roger had described, with a shepherd’s hut, railway wagon and moat. It felt appropriate to share this small piece of Suffolk with friends, acquaintances and fans on the tenth anniversary of his death. I had wanted to show that Deakin was an activist and a campaigner as well as a writer and that his writing succeeded because of his long immersion in this landscape. 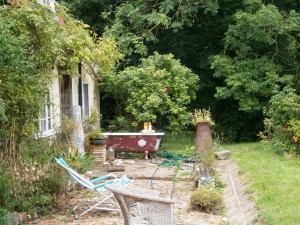 Deakin’s writing is an inspiration to many and I asked people what they loved about his writing. It was for people like us and about places like this, they said. Deakin wrote without pretension, used language that was accessible and had a knack of choosing a memorable simile or metaphor.  Deakin believed that his own writing should change people’s attitudes and build awareness of the human relationship with both wood and water. His books demonstrate his belief in the porous nature of the human relationship with the non-human world; he finds it hard to draw a distinction between the two.

Wood and water are the enduring themes of Deakin’s writing. It could be said that they are part of his dreaming. From Walnut Tree Farm, Deakin learnt about trees and their character, about water and its properties, about living within a local community, not just of people but of wildlife in all its forms. Wildlife shared Deakin’s house and he regarded the house as part of both nature and himself. This attitude towards nature, his identity with it, his feeling that “we are part of nature,” was a defining characteristic of his work and earned him his place in the canon of nature writing. His base at Walnut Tree Farm represented his rootedness, like a tree, but his journeying outwards, represented the flow and mutability of water. Towards the end of his life he wrote:

“The house represents what we ourselves would like to be on earth: permanent, rooted, here for eternity.” (Wildwood p15)

He may no longer be at Walnut Tree Farm but, by creating writing that would inspire and connect people, Deakin ensured that something of his own nature would live on.

This essay includes extracts from my 2014 postgraduate dissertation: The Nature of Roger Deakin – In Wood and Water.