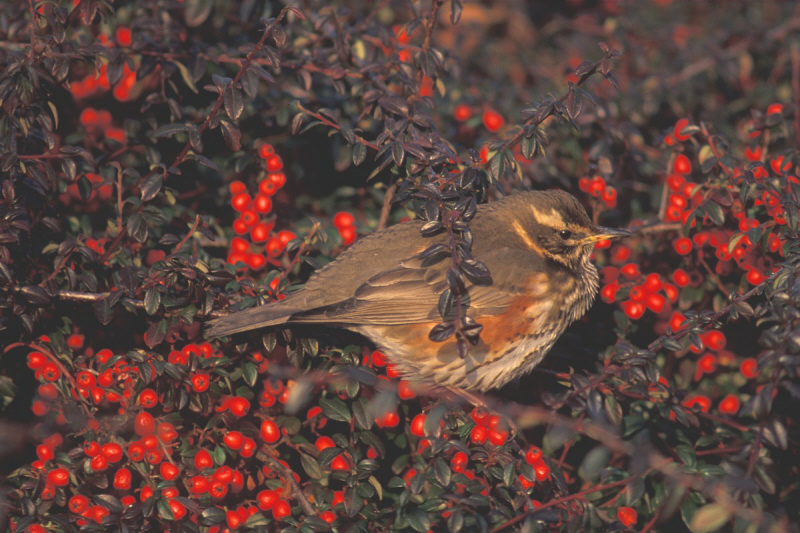 Posted at 11:51h in Journal by Melinda Appleby

It was dawn; the sun only a blush on the horizon. They came before the storm, in small groups flying south, their thin tseeep tseeep calls alerting me.  Redwings migrate at night and in October I listen out for them, often the only sound in the still starlit air. It is said that around 650-700,000 redwings reach Britain each winter.

Now they are here. Passing through, looking for winter feeding grounds. Unlike the spring migrants that come to breed, returning to nesting sites and territories, the winter thrushes arrive looking for food and one can never be sure when and where they will appear.

This morning, on our daily patrol round the village green, I found a redwing sitting in the road. I drew near but he stayed put. It is rare to have such a close view of these birds but now I could see his cream eye stripe. He appeared unhurt and I, concerned for his safety, tried to flush him away from the road. He moved a few steps. I tried again and this time he flew into a nearby bush, showing his rich rust red underwing from which he is named. He was probably tired and absorbing a little warmth from yesterday’s sun warmed road. Redwings travel some 5-600 miles from Russia and Scandinavia across the North Sea; quite a journey for a bird that usually frequents hedges and fields.

Perhaps this redwing had been battling the strong winds that swept across the country yesterday. According to the BTO’s winter thrushes survey, when they first arrive redwings and the other winter thrush, fieldfares, feed in trees and bushes. As January passes they are more frequently found ground feeding, which may reflect the lack of availability of fruit. Instead they take invertebrates from the soil. The ornithologist, Coward, writing in the 1930s, suggested that redwings mainly feed on worms, insects and molluscs and that they only turn to fruit if there is a hard frost. If the blackbirds and mistle thrushes have stripped the ivy, thorn and holly bare, the redwings are forced to move on ‘or perish.’ Coward observes that during heavy snowfalls, redwings linger until they are too weak to travel. A bad winter is then followed by one or two years when the redwings are scarce.

Redwings are always a special bird for our family. In the severe winter of 1962-3, snow fell on Boxing Day, followed by a month of extremely cold temperatures and blizzards in February. Birds struggled to find food. One morning a redwing had fallen into my father’s snowprint and was too weary to escape. We didn’t expect it to survive but brought it into the house.

We had an old orchard with gnarled and mossy Bramley apple and pear trees. The fruit was stored in the autumn and now, in these deep cold months, my parents cleared the snow and fed the apples to the birds. Very sick or weary birds were rescued and brought indoors. The redwing recovered in the warmth and was given water and fruit to restore its strength. It was too weak to peck the apples so my mother grated the fruit and put it back in the empty apple skin.  We closed off the hall and provided an apple bough for a perch. Every morning my father brought in a box of freshly dug, but frozen, compost which thawed out with the underfloor heating.

Gradually the redwing regained its strength and was able to feed itself. Outside temperatures barely hovered above freezing and we feared for the redwing’s survival. So it stayed with us for six weeks. Post and milk deliveries were redirected to the back door and the redwing thrived in its comfortable and capacious lodgings.

A day came in early March when the temperatures rose. Glossy, well fed and in prime condition, our redwing needed to return to the garden. Redwings usually migrate north in April. He stayed for a few days  reacquainting with his environment. Then one March day, when a weak sun made us think of spring, he left. Ringing records show that Redwings can live for up to twelve years. Most only survive for a couple of years. We hope our redwing, fattened on apples and worms, would have made it home to Scandinavia to breed and return here for several more winters.

Hearing the redwings arrive every October; seeing the tired redwing in the village this morning; just small reminders of my childhood time with this winter bird. Now they are here, we wait for their companions, the bigger, noisier fieldfares. This time last year I had already seen my first flock. But it is a strange autumn. Warm and windy. Some leaves have yet to turn colour; but some are already blown off the trees leaving November silhouettes.

Every time the winter thrushes return, I wonder about the winter ahead. Will it be cold? Will it snow? Will the birds return?