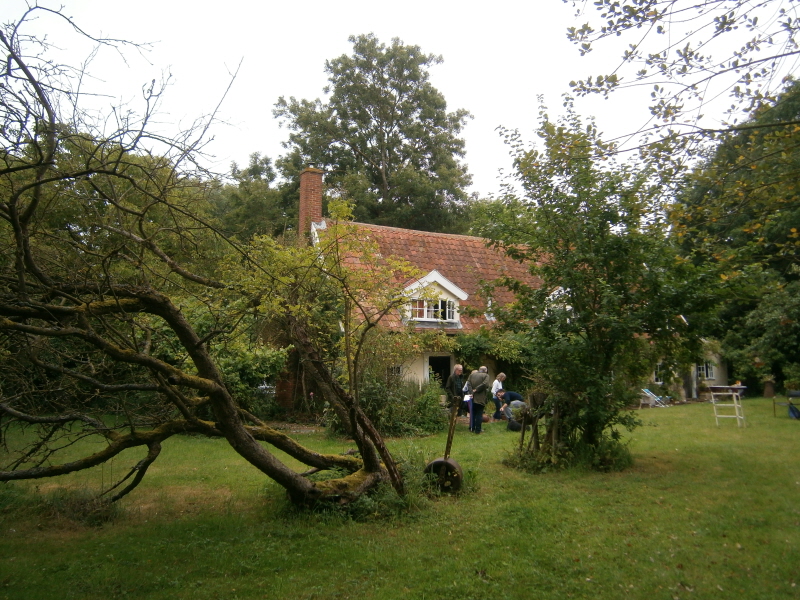 Posted at 19:41h in Journal by Melinda Appleby

A lane hung with trees, a fallen oak sheltering a wasps’ nest, a walnut tree hiding in the hedge, hornets clinging to oak bark in the wood, this is an unremarkable landscape.

A quiet patchwork of fields and tracks that threads through the parishes around Mellis, in the valley of the Waveney and its tributary the Dove. It is not a National Park, nor an Area of Outstanding Natural Beauty. But that is its attraction. Here in the secret and subtle heart of Suffolk, in a landscape hewn from woodland, pressed across by drovers, and fashioned by centuries of people working the land, is a back-of-beyond place. This is what attracted Roger Deakin to move here from London in the 1970s.

I live here, in these hedged and wooded claylands, and I walk the tracks and paths every day noting how things change with the seasons and the rhythm of the land. A morning when buzzards lift lazily into the lane, or evenings when the hedgehog snorts and sniffs past my shoes as I follow the green lane in a bat buzzing dusk. Times when the sudden harvest shaves the crops, and hares run for cover, black tipped ears racing across the stubble. Or, in a mist cloaked dawn, catching two roe deer standing in a shaft of sunlight. It is a landscape of little happenings set within big arable acres. Roger Deakin made it his own, spending his time rebuilding his house, working on his twelve acres and roaming on foot and bike.

I can walk the green lanes here for many miles, barely touching a road. I follow the old lane past water meadows, across the Thornham Estate, with its network of permissive paths, and on to join Cowpasture Lane and into Mellis. Cowpasture Lane was Deakin’s route into the countryside, an old drover’s road that changes in character from a wide byway to a narrow bramble brushed track. Either side of the lane are deep ditches and huge old coppice stools. It was Cowpasture Lane that Deakin fought hard to save.

Cowpasture Lane is such an important feature of our local landscape, and Deakin so instrumental in its survival, that I felt we should walk it in celebration of his life and work. I enlisted the help of local writer, and friend of Roger Deakin, Brian Guthrie, and we planned a walk as part of Waveney & Blyth Arts summer creative walks programme. The walk took place on Friday 19th August, the tenth anniversary of Deakin’s death.

With two readings from Wildwood about Deakins’ love of sheds, and how he first discovered Walnut Tree Farm, we arrived at the farm. We are grateful to the current owners who had kindly agreed to let the group walk around the 12 acres, still much as Roger had described, with a shepherd’s hut, railway wagon and moat. It felt appropriate to share this small piece of Suffolk with friends, acquaintances and fans on the tenth anniversary of his death. I had wanted to show that Deakin was an activist and a campaigner as well as a writer and that his writing succeeded because of his long immersion in this landscape.

Deakin’s writing is an inspiration to many and I asked people what they loved about it. It was for people like us and about places like this, they said. Deakin wrote without pretension, used language that was accessible and had a knack of choosing a memorable simile or metaphor.  Deakin believed that his own writing should change people’s attitudes.

Wildlife shared Deakin’s house and he regarded the house as part of both nature and himself. This attitude towards nature, his identity with it, his feeling that “we are part of nature,” was a defining characteristic of his work and earned him his place in the canon of nature writing. His base at Walnut Tree Farm represented his rootedness, like a tree, but his journeying outwards, represented the flow and mutability of water. Towards the end of his life he wrote:

“The house represents what we ourselves would like to be on earth: permanent, rooted, here for eternity.” (Wildwood p15)

He may no longer be at Walnut Tree Farm but, by creating writing that would inspire and connect people, Deakin ensured that something of his own nature would live on.

Read the full version of this essay under my Portfolio pages. As well as writing about the walk, I include extracts from my 2014 postgraduate dissertation: The Nature of Roger Deakin – In Wood and Water.