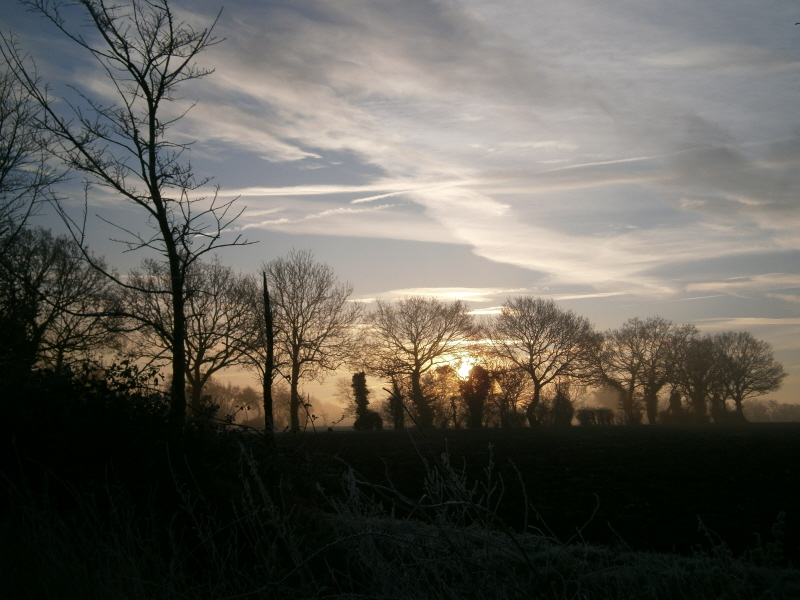 Posted at 10:43h in Journal by Melinda Appleby

I took advantage of a still frosty day to walk up to the wood.  I have been thinking about sound and our experience of it.

In January wildlife sounds carry through the cold air. Sound recordist, Geoff Sample, in a talk to Waveney & Blyth Arts, told us that after the winter solstice the increasing light triggers bird song and that the great tit is often the first bird to sing.

No human sounds disturbed us – no cars, no planes, no chainsaw. Long before we reached the wood we heard the bark of muntjac and saw them chasing through the hazel coppice on the boundary. But bird calls provided the soundscape – pheasants coughing their alarm; nuthatches excited chatter in the ash tops; a great tit calling insistently, its two bright notes echoing through the wood.

I think that the wood land acts as an amplifier, seeming to bounce and echo the sounds. Somehow the bird calls in January are crisp and bright, matching the weather; needle thin calls like icicles.

I rely on bird sound as much as sight to notice what is around me. It was an unusual call that made me look more carefully into the bramble beneath the ash tree. There was a marsh tit – the first I have seen for some time. Very similar in appearance to the willow tit, it can be reliably distinguished by its call.  To be absolutely sure I checked out the very helpful website of the British Trust for Ornithology (BTO) which provides video identifiers for hard-to-distinguish species. This confirmed my sighting.

Sound was important the following day when a repeated, sneezy, single note alarm call made me look up. Rising from the field in rapid flight was a snipe. Once again I checked out the BTO website when I reached home. Snipe is a declining species and I have never seen one in this bit of ordinary agricultural land. You just never know what might turn up and keeping ‘ears peeled’, as well as eyes, helps.

This year Waveney & Blyth Arts is launching its project ‘Sensing Nature’, which will link music and natural sounds through compositions created by, and for, visually impaired musicians. ‘Sensing Nature’ will explore the sounds made by the birds, animals and insects of the Waveney and Blyth river valleys as sources of inspiration for new music. The music will be composed by Jackie Walduck, Artistic Director of the Wigmore Hall’s Learning Ensemble and visually impaired composer, Adrian Lee. We are asking visually impaired musicians to join in some February workshops and begin the creative process leading to outdoor sound trails this summer.

For updates on Sensing Nature, keep checking back here. The sound trail performances will be  at the end of June 2017.

For video identification to birds and lots more see: www.bto.org