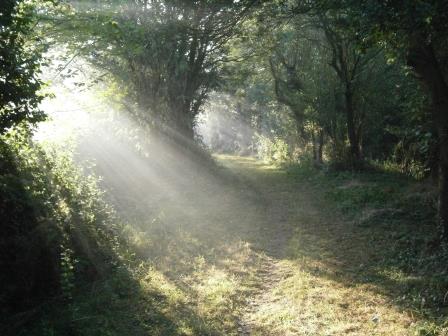 Posted at 08:34h in Journal by Melinda Appleby

This morning 70 swallows were gathering on the wires above the pond.

We were out at daybreak when the air is still cool. Hares bathed in the morning sun, their ears visible above the stubble of the cut barley fields. A buzzard lifted out of the ash tree. It has been a difficult year for wildlife and so a disappointing one for us humans.

The house martins did not use the nest here although they investigated it on three occasions. It had suffered considerable damage over winter, probably from the house sparrows. Maybe there was not enough damp mud to make it worth rebuilding or maybe the female didn’t come back.

Swallows were back in the barn next door although the pair deserted the stable down the road. So it was good to see such a gathering of birds this morning and to know that there had been some nesting success.

For other wildlife it has been a difficult year and birds have almost disappeared from the garden. We have seen very few fledglings. The little owl pair produced one owlet and the green woodpeckers fledged two from the old oak. We have found several dead moles, and hedgehogs are also suffering from lack of food. It is hard to be enthusiastic about the relentless heat and dry weather.

There has been better news for butterflies as we have seen more than usual including Common Blue and Small Skipper not recorded here before. The Green-veined whites have been abundant and there have been good numbers of Meadow Browns, Gatekeepers and Ringlets. But with a lot of plants drying out, will there be food plants for the caterpillars. Even the nettles have died here.

So the swallows provided a moment of cheer on our morning walk .