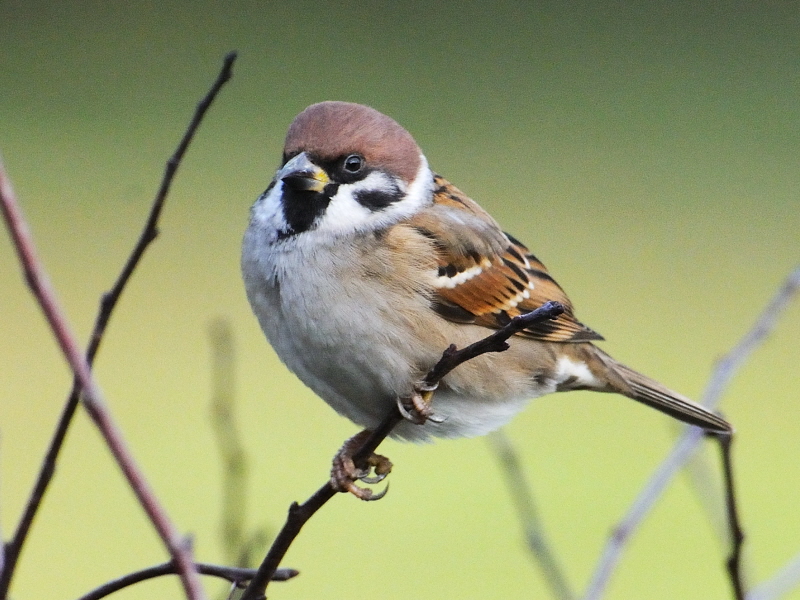 Posted at 10:22h in Journal by Melinda Appleby

October is a time of anticipation – watching and listening for autumn migrants. But nothing prepared us for the arrival of two Tree Sparrows.

Strings of mist crossed the fields yesterday as winter thrushes passed through. Redwings have been here for several weeks but the first fieldfare arrived on 20 October – a party of 67 flying determinedly west. Now they are stopping in the village, hunting for bushes heavy with berries.

We had just put up bird feeders to replace those that had fallen down over the summer and a robin staked a territorial claim to them, keeping away the first blue and great tits. As more birds became aware of the new feeding opportunities the robin found it harder to keep them away.  And that is when the Tree Sparrows arrived. We haven’t seen them for over twenty years and their numbers are reported to have fallen by 93% during the 1980s. The Waveney Bird Club reports only two known colonies on the Suffolk side of the Waveney.

Unlike the House Sparrows, of which we have a flock of about twenty, the male and female Tree Sparrows are similar in appearance. They have a smart chestnut cap and a black spot on their white cheek, being altogether neater and more dapper than their close relations.  This morning one appeared and fed for two or three minutes but now I am watching both of them feeding together. They are more alert and cautious than the flock of House Sparrows which is feeding nearby. Appearing two days in a row, we are hopeful that they might adopt us. Numbers of farmland birds build up during the winter with yellowhammers and reed buntings returning from the fields.

There will not be much work done today as we keep a watch on the garden feeders.